On-line support group for those learning Cornish with the self-study book Desky Kernowek by Nicholas Williams. You can get the Zoom joining details by contacting Ian Jackson iacobianus@googlemail.com. 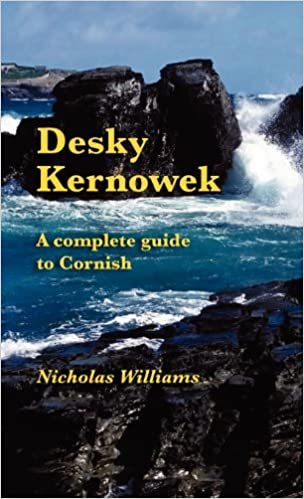 How a Cornish sentence is built

The Insular Celtic languages introduced a new idea into the Indo-European language family – putting the verb in front of the grammatical subject. Not just in questions as English does. In every sentence. This had a knock-on effect for the word-order of the rest of the sentence, and made Cornish very different from English. The verb-first rule was later moderated under English influence, but the changes that had taken place in the overall structure of the Cornish sentence were never reversed.

Professor Williams, the author of Desky Kernowek, is one of the world’s leading experts on the Cornish language. He is also a teacher of Irish, and familiar with Welsh. The coursebook rather assumes learners already understand the implications of the verb-first rule in Cornish. The meeting on 22 April will begin to establish a step-by-step guide for building Cornish sentences with the material taught in Desky Kernowek.