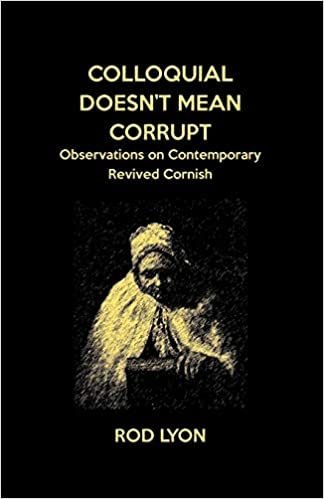 William Scawen, writing in the seventeenth century when Cornish was still the vernacular, compared Cornish with other Celtic languages, and said that Cornish was “lively and manly spoken”. When we hear the majority of present-day Cornish speakers, however, this is rarely true — particularly the “lively” part. Rod Lyon believes that for several years matters have been getting worse, and he has undertaken some research to find out why this is the case. Inevitably this has led him to study in depth the traditional Cornish texts. Present-day teaching methods and a lack of sympathy with the nature of the texts seem to be principal causes of the problem. As Lyon discusses in this book, much current teaching of the language is concentrated too heavily on the limited linguistic range of these texts, which were all works connected with religion, often following strict poetic measures and, by their very nature, lacking in idiomatic everyday registers. This approach has resulted in the most important aspect of any language — fluent and lively conversation — being sidelined or even ignored. Many people are able to write passages of formal Cornish based on the old texts, but struggle to put a natural sentence to­gether in impromptu conversa­tion. Lyon also highlights other aspects of the revived language which are contributing factors to the relative paucity of lively colloquial Cornish.