Handbook of the Cornish Language 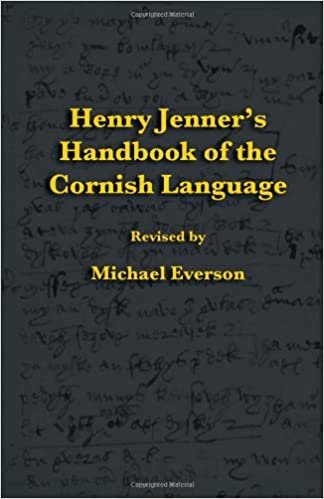 This new edition of Jenner's classic Handbook of the Cornish Language appears more than a century after the book's first publication. Now that the Cornish Revival has weathered many storms, it is well worth making Jenner's ground-breaking work available again, copies of the 1904 edition having become rare and expensive. The book is not a mere facsimile. It contains phonetic tran­scriptions in the International Phonetic Alphabet (IPA), to assist the modern reader in under­standing exactly which sounds Jenner was recommending. It also includes three articles he published between 1873 and 1877, near the begin­ning of his researches into Cornish, reproduced for comparison with the main text from 1904. The orthographic system which Jenner used in 1904 was the culmination of many years of work, but it is important to notice that Jenner was aware three decades earlier of Bell's "Visible Speech", and of Ellis' "Palæotype" and "Glossic". Jenner's familiarity with these pre­cursors of the IPA is significant. It shows him to have had real phonetic training. It places his work in the context of modern linguistics. Jenner's achievement as a linguist was remarkable. Synthe­siz­ing the texts, the description in Lhuyd's "Archaeologia Britannica" (1707), Norris' "Sketch of Cornish Grammar" (1859), Williams' "Lexicon Cornu-Britannicum" (1865), and Jago's "English-Cornish Dictionary" (1882), Jenner sorted it all out: he devised a system which was practical enough to begin to revive the lan­guage. He uses an orthography that supports Late Cornish while retaining a connection to the orthographic forms of the Middle Cornish scribal tradition. Jenner's Cornish looks Cornish. His orthography provides a good, clear relationship between sound and spelling without diverging drastically from that of the traditional texts. He used diacritical marks for precision where necessary. His section on grammar is wide-ranging and largely reliable. Jenner appears to regard the differences between Middle and Late Cornish as being more apparent than real; his work is generally free of the unwarranted purism of some later Revivalists. Of particular interest is his belief that it was undesirable to try to reconstruct a "foreign" accent based on "scientific affectation". He recognized that the contact between Cornish and English must have led to similarities in phonology, and held that the sound and intonation of the English spoken in Cornwall should have a proper and positive influence on the pronunciation of Revived Cornish.