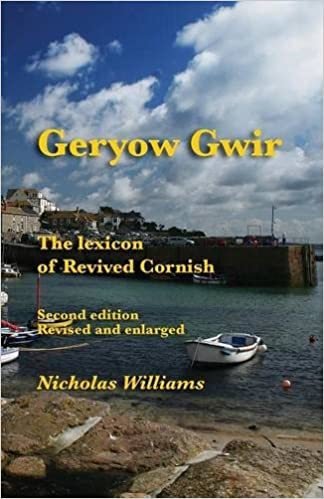 If one compares the vocabulary laid out in the handbooks of revived Cornish with the lexicon of the traditional texts, one is struck by how different are the two. From the beginnings Unified Cornish in the 1920s it appears that revivalists have tended to avoid words borrowed from English, replacing them with more "Celtic' etyma". Indeed the more Celtic appearance the vocabulary of both Welsh and Breton seens to have been a source of envy to some Cornish revivalists. From Nance onwards such purists have believed that English borrowings disfigured Cornish and in some sense did not belong in the language. They considered that revived Cornish would be more authentic, if as many borrowings as possible were replaced by native or Celtic words. Such a perception is perhaps understandable in the context of the Cornish language as a badge of ethnic identity. From a historical and linguistic perspective, however, it is misplaced. Cornish, unlike its sister languages, has always adopted words from English. Indeed it is these English borrowings which give the mature language of the Middle Cornish period its distinctive flavour. Cornish without the English element is quite simply not Cornish. Since there is no sizeable community speaking revived Cornish as a native language, we are compelled to rely on the only native speakers available to us, namely the writers of the traditional texts. We must follow them as closely as we can. It is to be hoped that this book will in some small measure assist learners of Cornish to speak and to write a form of the language more closely related to what remains to us of the traditional language.