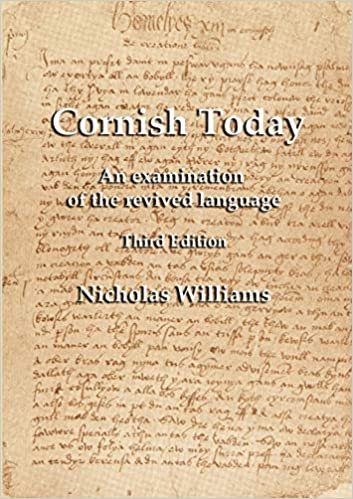 Cornish Today, originally published in 1995, was the first ever round-up of the principal varieties of Revived Cornish by a professional linguist who was also fluent in the language. The author, Nicholas Williams, argued that the sound system of 'Kernewek Kemmyn' is inauthentic, with implausible hypotheses embedded in its radical spelling system; he noted that Late Revived Cornish is too narrowly based to be sufficiently expressive in all situations; and he concluded that the Cornish of R. Morton Nance needed updating: to take proper account of the evidence for continuous prose furnished by John Tregear’s Cornish rendering of Bonner's Homilies (only discovered in 1949), and also to recognize more fully the sound changes that took place over several centuries within Middle Cornish itself.

The first fruit of this study was the English-Cornish dictionary first published in 2000. This employed an amended version of Nance’s spelling that Dr Williams called Unified Cornish Revised (UCR). A second UCR edition followed in 2006. This is still the most comprehensive dictionary of the Cornish language available today, and continues to be sold by Agan Tavas.

Next, after a decade of experience with UCR, Dr Williams collaborated with Michael Everson on a prototype of an entirely new spelling system (so called ‘KS1’), taking account of UCR, but also of wider considerations for an optimal orthography for Cornish in the 21st century.

When the hope that KS1 might be adopted as a standard spelling for all Cornish speakers proved vain, KS1 was fine-tuned to suit the needs of traditional Cornish specifically, and Kernowek Standard (KS) was born.

Cornish Today is now in its third edition. It is written in language which is technical. But one does not have to be a trained linguist to understand it. If you are really interested in the claims of authenticity made for revived traditional Cornish, and for Kernowek Standard as the modern successor to Unified Cornish Revised, you will find a mine of information in this book.

Dr Williams gained his PhD in Celtic from Queen’s University, Belfast, in 1972, and went on to become an associate professor in the School of Irish, Celtic Studies, Folklore and Linguistics at University College, Dublin.